Skip to content
Why Don’t We Know – Blog Posts

Why Don’t We Know – Blog Posts

All across the country we’re seeing government offices of all shapes and sizes use the pandemic as an excuse not to respond to open records requests in a timely manner. We discuss this at length in this week’s bonus episode.

This example came across our desks after production for that episode wrapped up, and it’s worth a mention.

The Dallas school district has been telling reporters that they have an indefinite amount of time to respond to their open records requests because of COVID, even though Texas state law requires a response within 10 business days.

Instead of complying, the district has taken the position that they have no business days as long as employees are working from home.

The state attorney general has issued guidance that pretty much backs them up, too, saying that it’s ok not to count business days when working with a “skeleton staff.” Take a look.

In our first WDWK episode “EXTRA,” we explored how many public universities unconstitutionally gag student residents assistants from speaking to the media without first getting permission.
A new example of that emerged this week at Cal Poly, where a floor of a residence hall was put into quarantine just three days into the semester. ‘
The News was broken by the Cal Poly student media organization, Mustang News.
Reporter Omar Rashad writes that he spoke to resident assistants, but that RAs asked to stay anonymous “since speaking with the media violates their contracts and they said they feared retaliation from the university.”

But, other positions at the university are often chosen through open, public searches.

In fact, one of the first things that Woodsen did at chancellor was to conduct a public search for a provost.

This highlights the fact that our research shows and our guests pointed out — that good, qualified candidates can be found in open searches.

Meanwhile… then entire UNC system is considering a change to its search process — allowing the system president to insert his or her own finalist, bypassing the board. It’s something that has drawn criticism from faculty.

As students return to campus amidst a global pandemic, news stories are popping up, citing the concerns of resident assistants in dormitories about how some universities are handling safety.

For example, at Southern Illinois University, RAs said they were upset about finding out in a chance encounter there was a COVID19 patient on their floor.

One RA told the student newspaper, The Daily Egyptian, “There are zero precautions in place that keep us safe.”

In Episode 2, we talked about how Brechner Center research found that public universities are unconstitutionally gagging the rights of student athletes by making rules that they can’t speak to the media. Similar research has found that this is a problem for resident assistants too.

Of the 20 public universities where we were able to obtain policies, we found at least 11 were problematic, saying things like “do not speak with any media” and “call the department head if the media has questions.”

The worst example we found was at East Carolina University, where the RA contract says the director must be told of all media contacts “even in a personal unofficial role.”

While these policies have been around for a while, the coronavirus highlights why this is bad policy.

We used public records requests to obtain these policies and the policy that we received from the University of Florida had previously been marked before it was handed over.

A  highlighted portion reads that a resident assistant, “is not allowed to speak to any member of the media unless requested or given permission to do so by a member of Senior Management.”

And below that, is additional text noting that the university “has probably violated that person’s First Amendment rights.”

It’s not clear who made that marking — all we know is that it was made before we got the document.

We asked the University of Florida if that policy still in place, but didn’t get an answer.

“This is a bit of conjecture, but I assume they don’t want people speaking out, therefore they provide that instruction with the assumption that people are going to abide by that and won’t speak out even though it’s a matter of great public concern,” Clark said. “Institutions tend to want to control information. And so therefore they do often in promulgating policies that they assume people will abide by even if they’re unconstitutional.” 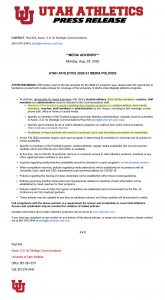 In Episode 2, we revealed that many major universities have unconstitutional policies, gagging the rights of student athletes, and telling them that they cannot speak publicly without first getting permission.

This flies in the face of the First Amendment.

Monday, the University of Utah not only doubled down on their bad policy, but took it an extra step further, warning members of the press covering Utah Athletics that if they reach out to players without first asking permission, they could face “sanctions up to and including revocation of credentials.”

In addition, Utah tells reporters that the rule applies to “their family members,” and that reaching out even though social media is prohibited.

This is, almost certainly, unconstitutional, according to Brechner Center Director Frank LoMonte.

Employees of public agencies have repeatedly challenged bans on unapproved contact with the news media — and they’ve won every single time, going back to a 1946 case against the New York City Fire Department. More than 20 times, federal judges have struck down government policies, like the one just circulated at Utah that tells public employees they can’t speak to journalists without approval.

But athletes likely have even more rights than ordinary state employees since college athletic departments and the NCAA have fought successfully in the courts  to make sure athletes are not legally classified as employees.
If it’s not legal to gag employees from giving interviews, then it’s certainly not for athletes, LoMonte said.
Tori Whidden2020-10-22T17:54:48-04:00