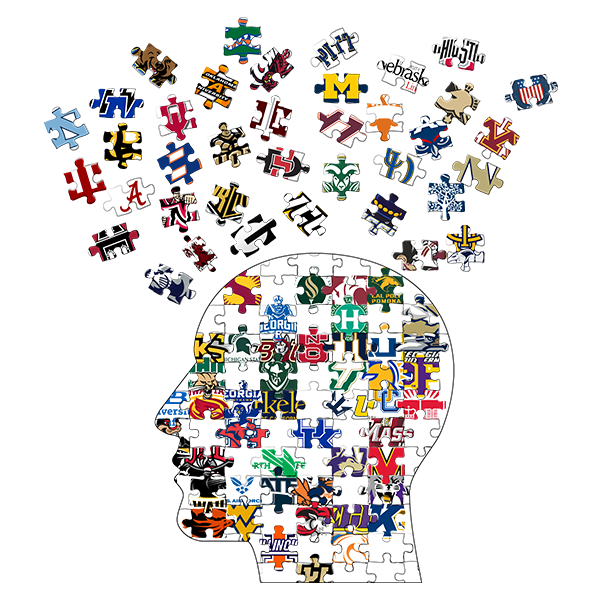 Ever since Junior Seau propelled the horrors of chronic traumatic encephalopathy into the minds of those of us who don’t suffer from traumatic brain injuries, we’ve repeatedly heard a singular narrative from those in charge of the sport of football: The sport is safer than ever.

But how do we know that?

At the college level, we’ve never seen those raw numbers. And so Season 1 of Why Don’t We Know set out to find the answer. Are there really fewer concussions than there were a decade years ago?

We asked 100 public universities across the country for their aggregate numbers — broken down by sport — for the past ten years, and if they didn’t have data for ten years, we said, that’s ok, give us as many years as you have.

The answer is really unsatisfying.

We still don’t know if head injuries are truly declining, and the reason we don’t know is that more than one third of the major universities that we asked —  major conference powerhouses in the Big Ten, Pac 12, SEC — they don’t know either.

They don’t know because they’re not tracking it.

32 universities told us they didn’t have documents reflecting the number of head injuries, while 9 universities simply never returned our requests for data.

For all but two of these schools, University-Purdue University Indianapolis (IUPUI) and Virginia Commonwealth University – a quick Google search will turn up instances where athletes suffered concussions – high profile enough to be covered by the media.

And we know that it’s improbable that the schools that told us they had no data also had no concussions. What’s actually happening – and a number of them confirmed this to us – is that they don’t look at overall trends. They only keep records of head injuries in individual player medical records.

Take for example, The University of Michigan, where in 2014, then-quarterback Shane Morris concussed on television during a game versus Minnesota and was put back into the game. It was so shocking to viewers that the play-by-play announcers expressed their outrage live on air.

“Shane Morris cannot be going back into this game,” ESPN analyst Ed Cunningham said on air. “This young man looked groggy after that hit. He’s being put back onto the field… he can barely stand up. This is not good player management. We’ve talked about player safety in this game, guys getting hit in the head. This is atrocious to me.”

Or Ohio State, where there was a highly publicized stretch in the fall of 2018 where Buckeye football players were suffering concussions.

Or the University of North Carolina, where a rising star with a promising outlook unexpectedly quit the game altogether after accumulating four concussions.

“I couldn’t go to class. I had to wear glasses inside,” Tommy Hatton told Fox Business in 2018. “That’s very extreme, like, circumstances. A concussion can last just a week of having mild headaches, but mine was very extreme.”

Ohio State and UNC both tout their concussion research clinics. UNC is particularly puzzling, since it’s part of a 30-university research collaboration with the Department of Defense called the concussion assessment research and education (CARE) Consortium, which aims to track athletes over a lifetime.

In total, three universities participating in the CARE Consortium — Michigan, UNC and UCLA — all told us they had no aggregate data on head injuries.

We reached out to all 32 schools that told us they had no data and asked them why they don’t track head injury trends. One school, Georgia Southern, ended up providing the data when we asked again. Most of the rest doubled down.

Three universities cited privacy reasons: Georgia, Purdue and Florida State — where officials said, “the manner” in which they track is “protected health information.”

Privacy rules would not affect this data, however, since what we sought was not identifiable information, but rather simple numbers. In addition, every student athlete in the country signs a waiver allowing universities to talk about their injuries.

That means that athletes like former Texas cheerleader Kaitlyn Benhke, who had to quit because of her concussion symptoms, were not counted.

“I think that’s crazy,” Benkhe said. “I mean, yeah, on the one hand, I think that’s crazy and on the other hand I get it. It’s really hard to implement a system like that in a school of 52,000 people … So, I understand resistance to it, but I do think that they still need to do it. Of course. I mean, it’s crazy that they haven’t as a school in the Big 12 and such a power athletic university, I’m honestly shocked that they claim to not have that data. That is very, very surprising.”

There was one answer for why data can’t be shared that really stood out, and it came from the largest public university in the country, the University of Central Florida.

Although Central Florida is a public institution in a state with some of the best open records laws in the country, it can hide athletic records inside of a private athletic association, which functions practically as an arm of the university. And because it is private on paper, it doesn’t need to respond to records requests.

UCF flat out told us the records we wanted are part of the athletic association, and therefore they are not public.

But in 2008, UCF argued — successfully — the opposite of that argument in court in order to shield itself from a lawsuit filed by the family of a dead football player.

Ereck Plancher died during a football practice, and his family sued, alleging wrongdoing. But when the University claimed that state institutions are immune from litigation, the lawsuit was tossed.

‘You got to start somewhere’

We talked to some universities who do track this data, and asked them why it matters.

At Rutgers University, which shared some of the most complete and comprehensive data, Kyle Brostrand told us that when they started tracking trends, they saw great improvements to safety.

“They also think about days lost for student athletes as far as practicing and getting better. So they want to think of it that way. So if there’s something that they can change that will allow them to practice safer and to keep guys healthy, they will do that.”

At the University of Washington, Robert Scheidegger, the associate athletics director for health and wellness, said that tracking trends helps progress continue in a sport where a lot more needs to be done.

“You got to start somewhere,” Scheidegger said. “… these mild traumatic brain injuries or what people call concussion, those are really difficult to diagnose and they still have yet to identify a gold standard for doing a diagnostic test. …I think right now we’re just trying to be a part of that solution by gathering as much information as we possibly can.

And we want to keep going down that road because we want people participating in sports. We want people being active. We want people to grow up feeling safe and feeling like it’s okay to have their kids participate in all different types of sports, whatever they’re interested in because we know how valuable sports are to our society and to the development of children and the development of young adults and all the lessons that can be learned there. And so what we want to do is continue to try to create as much safe environment for sport participation as we possibly can.”

Trends we can see

Without aggregate data and the ability to look at overall trends, we began looking at other statistics to tell the story.

Every year, the National Athletic Trainers’ Association conducts surveys of the staff trained to deal with hurt athletes. and year after year, trainers report that coaches push them to put players back into the game after head injuries.

Seven years ago, about half of trainers said they felt pressure by football coaches to clear players who weren’t medically ready.

Just last year, in 2019, 58 percent said coaches pressure them to make decisions that are not in the best interest of players’ health, and 19 percent of trainers said coaches are playing players who aren’t medically cleared.

The numbers are actually worse.

When the NCAA was created in the early 1900s by President Teddy Roosevelt, its goal was to make the sport of football safer. So, on paper, the NCAA would be the perfect entity to track this kind of data. It has access and authority over all universities that want to participate in sports.

But more than 100 years later, the NCAA says that health and safety is left up to the universities. They are trusted to police themselves.

The NCAA does have something called the Injury Surveillance Program (ISP,) which began in 1982. The ISP is a data collection initiative designed to track and analyze medical illnesses and injuries resulting from sport participation.

But these programs are completely voluntary. There is not even a requirement that a participating school

send in data for every sport. That leads to mismatched data that is not easily analyzed.

The program also relies completely on certified athletic trainers reporting this data on a consistent basis, so any school that cannot afford a trainer on each team will automatically be eliminated from this database, leaving huge gaps in data.

This is the same problem we ran into when trying to analyze data from the universities that gave us data in response to our open records requests. Every school tracked in their own way, some just gave one number for the entire student athlete body. Some broke down by sport, but not by year. Some broke it down by year, but not sport.

It was impossible for us to identify trends with such inconsistent data.

Universities That Never Returned Our Request for Data