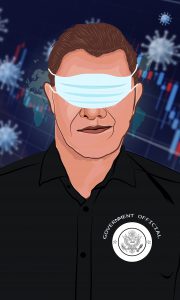 Secrecy and the Coronavirus

As our team at Why Don’t We Know was wrapping up the reporting for this season, COVID-19 hit. As we all know, it changed the way that everything worked —  including us.

While we figured out workarounds to complete our reporting and editing remotely, not every workplace pulled off the transition.

Dave Cuillier, president of the National Freedom of Information Coalition, described the attitude of government agencies this way: “Sorry, it’s not ‘essential.’ We’re going to take longer, or we’re not going to deal with it.”

While some adjustment period is understandable, not all of the agencies’ excuses seemed legit.

Take, for instance, the FBI. When the pandemic hit and nonessential employees were sent home to work, the FBI for some reason decided it was an opportune time to stop accepting requests by email. You can still submit FOIA requests to the FBI. But only if you mail a paper letter — to the office that’s barely staffed.

It’s hard to imagine how forcing requesters to use the postal system will help facilitate fulfilling requests or promote public health.

“I mean, it kind-of bends the mind in a different way. Shouldn’t we be encouraging electronic submission versus paper submission?” Mutchler said.

So did a bunch of city governments, at least for a while: Philadelphia, Washington, D.C., Portland, San Diego and Fresno. And the Chicago Police Department — in the middle of a national crisis over police accountability.

The city of Louisville told reporters asking for three weeks of pandemic spending numbers that  it was “too burdensome to provide.”

And states like Pennsylvania, Michigan, Rhode Island and Washington waived their compliance timelines, so that even if on paper it says they’re accepting requests, there’s no real expectation for a response anytime soon.

“Of course, government agencies, including universities should be completely transparent in how it’s dealing with the emergency,” Cuillier said. “There’s no downside with that.”

Government agencies are equipped to figure this out. And we know this because some of them are doing it right.

The Environmental Protection Agency, for example, pretty quickly moved its FOIA staff to teleworking and announced that requests would continue to be fulfilled.

This episode of Why Don’t We Know explores how government agencies around the country — universities included — are using the coronavirus pandemic as a way to be more secretive.

In addition to delaying or suspending FOIA compliance, agencies are frustrating transparency in another way: manipulating the Health Insurance Portability and Accountability Act. You probably know it as HIPAA.

In this podcast segment, Carolyne Hartley, a privacy compliance strategist and expert witness for HIPAA breach cases, and Al-Amyn Sumar, a media lawyer who is trying to help news organizations get better data while covering COVID-19, describe how many officials either don’t understand what HIPAA says, or are hoping that the public don’t understand what it says and are using it to hide critical information.

“I see it cited on Twitter all the time in all kinds of different contexts where people say, “Well, HIPAA protects this,” and actually HIPAA has nothing to do with whatever they’re talking about,” Sumar said.

HIPAA has very stringent provisions about how exactly information needs to be de-identified before a medical provider or a health insurer can release it to the public.

But according to Hartley, the confusion often boils down to one thing: Politics.

“We’re kind of victims of our own freedom,” Hartley said. “In a communist country, you wouldn’t have that freedom. The communist government would come in and say, ‘you tell us who’s got COVID, who’s been diagnosed, give us the names and the people you’ve been around, and we’re going to contact every one of those.’ In our country, where we do exercise the luxury of freedom — unfortunately, that boils down to whether or not the public health authority, or the individual nursing home decides that they want to share that information.”