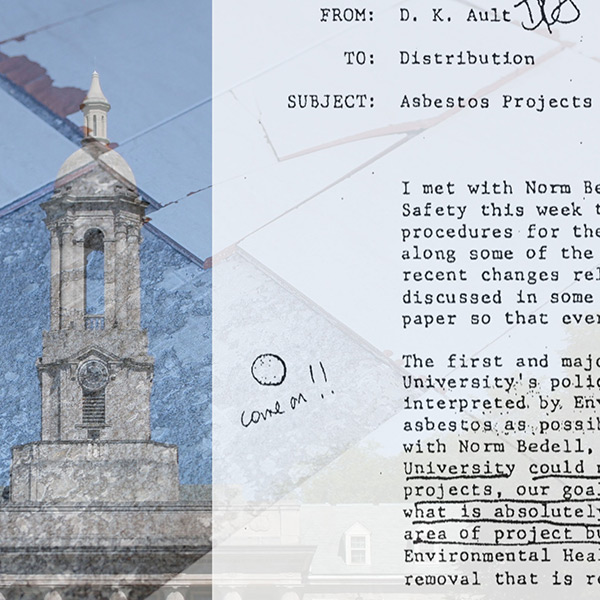 In 1977, professors at one of the largest public universities in the country started complaining that parts of the ceiling in their offices and classrooms were flaking off and falling.

The university conducted widespread testing in more than 100 buildings and found out that the material was — as feared — asbestos.

They started to remove it, while simultaneously – and at the suggestion of the United States Justice Department – suing the manufacturer, Johns Manville, for $8.5 million to clean it up.

But Johns Manville was in bankruptcy, facing hundreds of claims like this one, and so the university only got a fraction of what they were hoping to get.

“They were paying nickels on the dollar to settle,” said environmental consultant and asbestos historian Barry Castleman. “They created far more liability than its assets could ever pay.”

And so, this university and others like it, were left on the hook for a pretty big cleanup bill. When officials realized this, “they do this about-face,” said longtime asbestos litigator Mike Robb. “They changed their policy to going from removing as much as possible to removing as little as possible.”

Our analysis of asbestos settlements and current records show that this was the case for dozens of universities across the United States.

“It is a ripple effect,” said Robb, who is a partner with Bailey Glasser law firm. “And when they find out that, ‘Hey, we’re not getting reimbursed for this by these property damage trusts so therefore we’re not going to spend our money on it. We’re not going to remove it. We’re just going to keep an eye on it,’ which is a lot cheaper.”

At the time, there was a huge outreach by a group calling itself the Safe Buildings Alliance — which was really a PR firm created by asbestos manufacturers — telling the public that asbestos is safe to remain in buildings as long as it goes untouched.

But Castleman says the science does not support that.

“I mean, this stuff is falling apart,” he said.

But the result is that, today, best estimates are that asbestos-containing materials are prevalent at American colleges and universities, and that poses a health hazard to students and faculty that is seldom discussed.

“Because you can’t see it, touch it, taste it, smell it, the average person can’t identify asbestos or manage the risk,” said Linda Reinstein, president and co-founder of the Asbestos Disease Awareness Organization.

“It is the perfect crime,” she said. ”I live in L.A. and you couldn’t write the script for asbestos.”

Some universities voluntarily post information about where asbestos still exists on campus, but those reports are varied, inconsistent and voluntary.

Of the 51 college websites we reviewed, none of them included information about air quality testing. Only four universities even list which buildings contain asbestos, with others simply stating that more than 90 percent of buildings contain it.

“It feels to me that these asbestos control programs are only established and put online to make people think that any asbestos that’s in this place is being controlled,” Robb said. “What are you controlling? Are you controlling the asbestos, the hazard? Or are you just trying to keep it quiet so people don’t get up in arms about it and the next thing you know people were demanding that the asbestos is removed. It benefits them.”

At several universities, we found documents that advise individual departments to purchase floor mats to be placed underneath chairs that would prevent them from scratching asbestos tiles, making them friable.

Other universities warn that items like “adhesives behind whiteboards” and bathroom tile grout are not sampled but could contain asbestos.

At the University of Montana, there were calls for widespread calls for testing in 2019 after asbestos was discovered in a building that housed a preschool. Reports show they had not tested since 2011. The university did not respond to a request for comment.

Another major state school had just a single line buried in a 25-page document posted online warning that the ceiling surface does “contain asbestos.” The only information provided was to avoid contact.

We reviewed environmental health and safety records at 50 public universities: 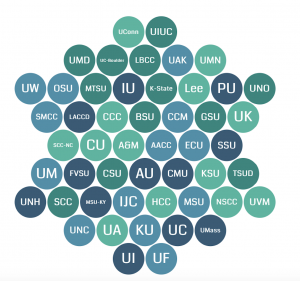 Asbestos is a mineral, mined out of the ground, that’s fire-resistant and works as a great insulator.

That made it really appealing as a building material in the mid-20th century. But asbestos was too good to be true. And health science quickly proved that asbestos causes cancer — a specific kind of cancer in the lining of the lungs or stomach, called mesothelioma. In fact, the only known cause of mesothelioma is inhalation of asbestos fibers.

But the general public thinks of asbestos as something for steel mill workers to worry about — not college professors.

Even seasoned asbestos litigator Mike Robb was no exception. He was shocked in 2014, when a case came across his desk, of a 22-year veteran Penn State professor Peter Labosky, who died of mesothelioma.

“How does that guy, a Ph.D in organic chemistry, how does he get mesothelioma?” Robb asked. “Then you start looking at where he was working in the classrooms that he’s in.

In the 1980s, as the science around asbestos harm became clear, advocates successfully moved to ban it, but the ban was reversed after just two years by a federal court in the New Orleans-based Fifth Circuit. An EPA rule restricting use in K-12 schools does not apply at the college level.

The result is that there is nothing forcing universities to remove asbestos, monitor air quality in buildings that contain it, or share any information about where it is.

The only effective action that has stopped asbestos use in the last 40 years are lawsuits like the one Mike Robb is now filing against Penn State on behalf of the Labosky family.

As part of his lawsuit, Robb forced Penn State to turn over 20,000 pages of documents, decades of internal memos and reports, detailing Penn State University’s knowledge of the problem, and it’s failure to clean it up.

The timeline goes all the way back to the 1970s, when Penn State sued the asbestos manufacturer and didn’t get the $8.5 million dollars it needed to get rid of all the asbestos.

Court documents show that back then, the university’s industrial hygienist — the person in charge of identifying workplace hazards — was a woman named Maurine Claver, and she gave an interview to the campus newspaper, saying, “the asbestos is everywhere.”

Three days later, a memo goes out to a number of officials, including Claver, stating the university “cannot afford” to remove asbestos as it had planned. It says, quote, “in all future projects, our goal should be to minimize the removal of asbestos to only what is absolutely required. Obviously, this will help us a lot in the area of project budgets.”

In the version of the document that Penn State handed over for the lawsuit, those words are underlined in pen, and in the margins next to those markings there’s a hand-written note from Claver. it says, “Come on!!”

Claver – who couldn’t be reached for comment – wasn’t buying the budget argument.

And for the next 17 years, Robb says officials basically just sat on the problem.

Court documents show they didn’t warn students or professors, they didn’t even keep tabs on where the asbestos was until the early 2000s, when figuring out what buildings contained asbestos became a way to improve the look of their balance sheets.

Removing it now would cost an estimated $35 million, Robb says.

“These massive university systems that have billions of dollars, not only in annual revenue, or annual operating budgets, but they’re also worth billions,” Robb said. “From my position, spending money that you have to make people safe is worth every penny. When it comes to the safety of your faculty and your staff and your students, how much is their life worth?”

At Penn State, tax documents show a $6.8 billion budget, plus a $3.2 billion endowment, with $800 million that can be spent at the discretion of the board.

Yet, for the last ten years, Robb says Penn State has spent more money on landscaping than it did to abate asbestos.

Meanwhile, students studying about the hazard of asbestos, in a class taught by an industrial hygienist, are learning in a classroom building that still contains asbestos.

“I mean, why do you spend hundreds of millions of dollars for football practice arenas, and fields and things like that? Because you want to spend the money,” Robb said. “Or you go out and you tell people, “Hey, we need money for this.” Well, you’ll never see one of these universities going around begging their alumni for, “Hey, we need money to remove the asbestos that we exposed you guys all to for the last 100 years.” It’ll never happen.

In a court hearing in February, Penn State argued that it has nothing to hide — that it turned over tens of thousands of pages of documents — and attorneys for the university indicated they will fight the premise of the case.

More documents, obtained as part of the lawsuit, show that Penn State found it would not be “economically feasible” to do air monitoring, but Robb was able to do some testing in the building where Labosky worked for decades and he found asbestos present in the mechanical room where the HVAC system operates and draws air to circulate.

“It’s our position that he was exposed every single minute of every single day that he worked inside of these buildings because he wasn’t holding his breath in there for 22 years when he worked there,” Robb said.

Court documents show that Penn State is aware that asbestos travels through the HVAC system, yet to this day, Penn State has no formal awareness program.

‘It would shock people’

Legal cases like this are not common. We were able to find only a handful of others.

And Robb says that is perhaps because the most challenging thing about these cases is that the consequences are not immediate.

Mesothelioma does not develop for 20 to 40 years after exposure to asbestos fibers.

Imagine being diagnosed 40 years after college, and then trying to back track to show that you were exposed. Would you even remember what dorm you lived in? Where your classes were held?

“I think every business, whether you’re a school or a corporation, they’re banking on the length of time,” Robb said. “And the more I look at universities and colleges and their procedures and their methods about how they address asbestos, it feels like a very common theme. … They don’t tell people about it, and then they just sit back and hope that it doesn’t come back to haunt them in a form of litigation down the road.”

And even though he’s seeing more cases, “I think it’s just the tip of the iceberg,” he said.

“If I stopped you on the street and said, ‘… there’s all kinds of asbestos in that old steel mill that’s closed down over there,’ you’d be like, ‘Yeah, so…’ It wouldn’t shock you,” Robb said. “But if you stop people and say, ‘Hey where does your kid go to school? Oh yeah, there’s asbestos in that building.’ They’d be like, ‘What? Why?’ It would shock people.”

Additional reporting was done by Tori Whidden and Adriana Merino.